General Decoding Information
This topic can be somewhat confusing, especially with the amount of information available and the interpretation of it. The primary pieces of information you'll decode are the Engine Code and Partial VIN. You can decode the casting number. And you can check dates. The engine code and partial vin # will accurately nail down whatever the thing is rather quickly, and the other information will fall into line with that. If you already know what you're doing, Chevy Engine Codes are listed down below.

Let's decode something real quick like, you can read the details further down below: 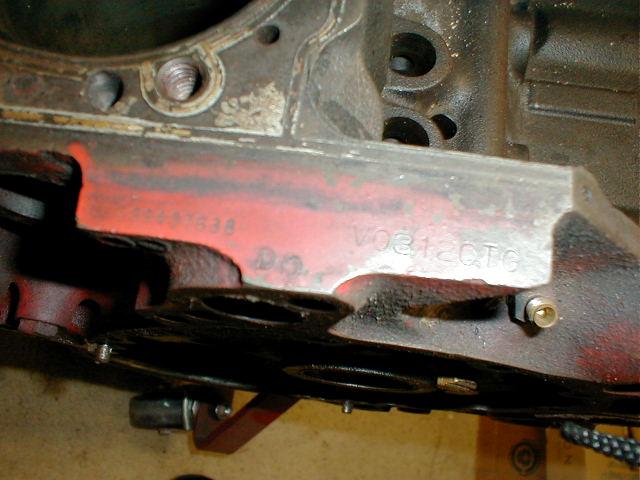 My point here I guess is... trying to decode "3970010" is almost pointless. It's a 350. If you're trying to buy a 350 and you see this thing laying on the ground, then there it is. But if you want to know EXACTLY what the thing is - you need more than the casting #. Once you identify something - like the above vette block, then you can conclude what other pieces and parts should have been on it, and check those casting #'s. And/or - you can check dates to make sure everything came together when original.

As you can see - codes are reused and/or they span years. This is why I looked at the VIN code 1st. 1973 - eliminates every other possiblity. Everything else lines up and there's no confusion.


The engine assembly date must precede the car build date (often by a few days), otherwise something is amiss. Some engine machining operations (decking) will obliterate the engine ID.

VIN Code Format
The vin code format is stamped onto most engines. The format consists of divisional identification number, model year, assembly plant designation and vehicle serial or sequence number.
In 68-69 model cars, the serial (VIN) number of the car the engine was installed in is stamped next to, or under the engine code ID.
Starting in 1970, the serial number is stamped either above the oil filter, somewhere on the block pad (in front of the cylinder head), or on the transmission flange somewhere. Chevrolet issued technical service bulletins to indicate which engines were to recieve a vin stamp, so who knows what could have happend (or not happened).

Suffix codes are either alphabetical or alphanumeric. Select the portion of the alphabet for your code. For example, select "DTR-HQ" if you'd like to find code DZ. In some cases suffix codes are reused twice or more over time, in this event check the partial VIN code or block casting date code and then see what year the block was made to pin down what application your block was originally used in. This list of codes is a summarization, it is not complete nor all inclusive.

Here's something secret I've been working on since 2005.

"Numbers Matching"
This is my opinion, and the generally accepted norm:
When people say "It's numbers matching" - what they mean is the engine (or other component, i.e the transmission) can be MATCHED to the vehicle it was originally used in. This match is done via the PARTIAL VIN stamp on the component. The partial VIN will match the vehicles VIN. If it does - it's "numbers matching", otherwise - it's not. done. end of story.
Some folks use these terms loosely, or will say "numbers correct" or something to that effect. But numbers correct is not numbers matching. Again, it either matches or it doesn't. If it doesn't match - is it correct?
Numbers matching is important when you're trying to decode a Z28 or Super Sport where the VIN won't identify the vehicle as such. You need to decode the engine and see if it matches the vehicle, and if the code signifies Z28 or SS equipment.
Lastly, in extreme cases, you'll want to verify the numbers stamped onto the component were the ones stamped into it originally and aren't restamped.
The point of this article is to help you figure out how to decode stuff.

What good is knowing the transmission? MT (or Manual transmission) IMPLIES - the boss (or the pivot itself) for the clutch Z-bar is present and threaded and the crankshaft can accomodate a pilot bearing. Good news is 99.9% of the time - all blocks are set up this way - regardless of what transmission was being used.

Hey man - is this a 4 bolt main?
I have no idea.... drilling the holes is a machining operation. It can be done on any 3970010 (or other) block. 99% of the time, the casting # won't indicate anything. HOWEVER - the engine code MAY HINT at this fact. Take a truck 350. If it codes out as a 1/2 ton application - we can bet money it's only a 2 bolt. but if it's a 3/4 or 1 ton application, or some high powered application, you can ASSUME it might just be a 4 bolt main. Both of the above 350 examples are 4 bolt mains due to the application. The only guarantee is to take off the pan and look.

What's this A/F/X stuff?
This is the GM body designation. All these are identified here. Quickly, A = Chevelle, F = Camaro, X = Nova. If you're looking at the engine code - this is already known. If you're looking at the casting # information and it mentions 3970010 "A/F/X/Y/B".... basically this means "it's used in everything", whereas if it simply states "Y"... this means corvette.